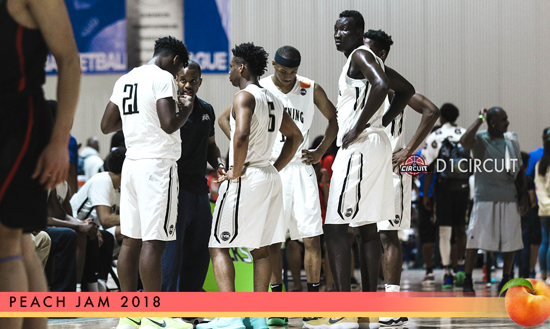 The NY Lightning are returning to the Peach Jam once again. The tough and gritty squad had plenty of doubters prior to the season, but quickly silenced them after getting out to a 4-0 start in session 1 of the EYBL. Their ability to play team basketball and harder than their opponent is what separated them from other teams in the league. Guards Posh Alexander and DaShawn Davis led the charge for the Lightning this year. Their elite slashing ability and how hard they play makes them one of the most lethal guard duos throughout the EYBL. Head Coach Shandue McNeill knows that qualifying for the Peach Jam is no easy task from his years of coaching in the past.

“It takes a lot of focus, dedication and a lot of hard work to make Peach Jam,” said McNeill. “I think we have a group of guys who were willing to listen to what it takes to make it happen.”

“It takes a lot of focus, dedication and a lot of hard work to make Peach Jam."

Alexander, a class of 2020 point guard, is the star for the NY Lightning. Alexander (247 4-STAR) has led by example with his toughness and work ethic. He started off the EYBL season with a bang as he came away from session 1 as Most Valuable Player. Going into this season, there wereplenty of question marks about the NYC native. People questioned whether he was a point guard or capable of running a team. Alexander proved them wrong with a huge year. Peach Jam is a whole new season, but expect Alexander to compete at a high level come the second week of July.

Like most NY Lightning teams in the past this year’s team has a strong backcourt. They have a lot of guard depth with guys like Posh Alexander, DaShawn Davis, Alejandro Vasquez and Jordan Dingle. Each of them impact this team in their own way. Alexander is a high level playmaker and is a bigtime athlete. Davis is a great slasher who finds a way to score in a variety of ways. Like Davis, Vasquez is a great slasher with his tight handle to get to the basket. Jordan Dingle has had a breakout season with his consistent shooting. All four of these players are a huge reason why the Lightning finished second in their division and are on their way to Peach Jam.

The NY Lightning’s frontcourt has developed nicely as this season has gone on. Players Fredelin De La Cruz, Bernard Kouma, K.C. Ndefo and Clifford Omoruyi all played big roles for the Lightning during the regular season. De La Cruz returns from last year and has taken on a bigger role. He is a crafty scorer with a knack for being at the right place at the right time. Kouma, Ndefo and Omoruyi have all done their parts as well. The 6-foot-8 Kouma has progressed a great deal from the last year and has shown great flashes in multiple games this season. K.C. Ndefo joined the Lightning this season and brings a different type of energy when on the court. He’s athleticism and rebounding ability brings something unique to this talented squad. Omoruyi (247 3-star) has emerged as one of the top centers in the class of 2020. He was a key addition to the Lightning in session three and will be utilized a great deal in Peach Jam.

There’s no hiding it, the NY Lightning were slept on once again this year. After beating one of the most talented teams in the Bluff City Legends at session 1, they showed they can compete with anyone they go against. The Lightning are at their best when playing fast, forcing turnovers and scorer. Coach Shandue McNeill expects this whenever his team takes the court.

“I can expect relentless defense and I can expect us to play up tempo, McNeill said. “When we are winning we are playing in the 80s and the 90s.”

The Lightning are one of the tougher teams to go up against because of they can attack opposing teams in so many different ways. They are capable of scoring the ball off the bounce or can knock down shots. They are also tremendous on defense with how they speed teams up and play to their pace. McNeill likes how unique his team is.

“I think our versatility makes this team unique and we have smaller guys who can guard bigger guys, which makes it really difficult on other teams when we are at full strength,” he said.

With a team that is so unique are tough to keep up with, you can never count the NY Lightning out. There may be teams that are considered to be more talented, but as we have all seen this season this doesn’t scare them the least bit. Coach Shandue McNeill believes in his players and thinks they are capable of winning it all.

“I just think we are very difficult to prepare for and we have a lot of guys who can play so I think it’s something we can go do,” he said.